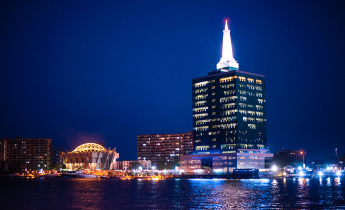 Nigeria is the most populous country in Africa with over 200 million people and half of the population is under 18 years old. It is the continent’s largest economy by GDP with great abundance of hydrocarbon and natural gas resources which makes it Africa’s biggest oil exporter. The country is also hugely blessed with vast arable land and the agricultural sector is attracting considerable investments, is growing at over 7% per annum and is a major contributor to the Nation’s GDP. The nation’s predominantly young population is highly entrepreneurial and is evident in the Technology and Creative Sectors (especially Music and Nollywood, Nigeria’s version of America’s Hollywood). The Nigerian economy is an investor’s delight and destination given the huge return on investment and marked constant improvement on ease of doing business.

A key regional player in West Africa, Nigeria accounts for about half of West Africa’s population with approximately 202 million people and one of the largest populations of youth in the world. With an abundance of natural resources, it is Africa’s biggest oil exporter, and has the largest natural gas reserves on the continent.

Nigeria is highly vulnerable to the global economic disruption caused by COVID-19, particularly due to the pronounced decline in oil prices and spikes in risk aversion in global capital markets. Nationally, 40 percent of Nigerians (83 million people) live below the poverty line, while another 25 percent (53 million) are vulnerable. With COVID-19, many of these 53 million vulnerable people could fall into poverty. The magnitude of the health impact depends on the duration and the domestic spread of the outbreak, while the economic impact hinges on oil prices. Oil accounts for over 80 percent of exports, a third of banking sector credit, and half of government revenues. Oil prices also affect growth in non-oil industries and services, with additional pressures arising from foreign portfolio investors’ reassessment of risks and domestic liquidity management.