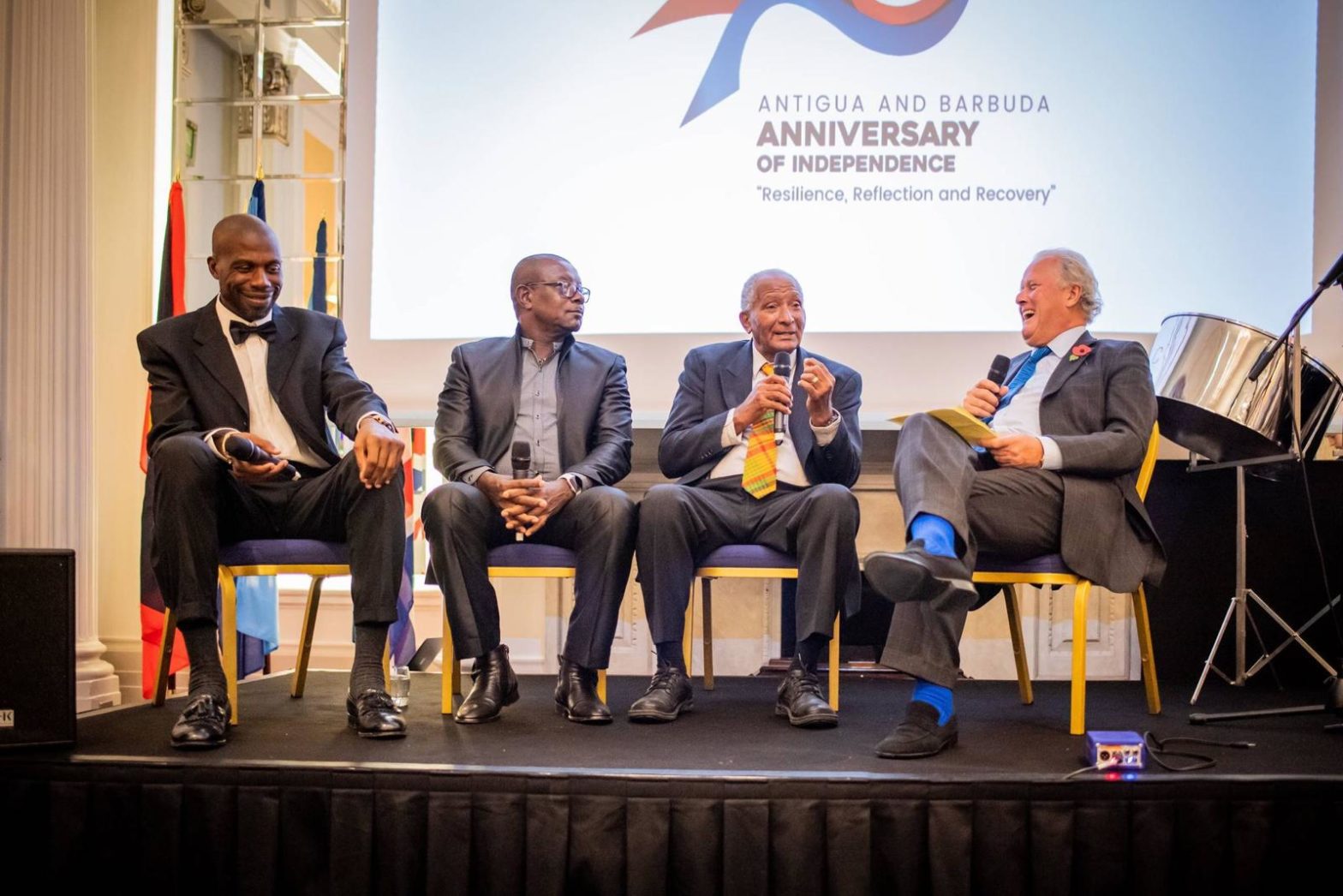 A trio of West Indies cricket legends spent a week in London celebrating 40 years of Antigua’s independence from Great Britain, and they took the chance to whet the appetite for next spring’s eagerly anticipated Test series with England.

Curtly Ambrose, Andy Roberts and Richie Richardson – sirs all – donned black ties to talk about their illustrious careers, in a Q&A with Lord Marland, chairman of the Commonwealth Enterprise and Investment Council and co-owner of The Cricketer magazine, at the RAF Club in Piccadilly.

Earlier in the day the trio helped the island’s tourism professionals explain how the island had coped effectively with Covid, during a presentation at the Royal Over-Seas League, behind the Ritz and next to Green Park.

England play five T20 internationals in Barbados on Jan 22, 23, 26, 29 and 30. The Test squad then go to Antigua for a four-day warm-up match (Coolidge Cricket Ground, March 1-4) and the first Test (Sir Vivian Richards Cricket Ground, March 8-12). The second Test is at Barbados’ Kensington Oval (March 16-20); and the third is at Grenada’s National Cricket Stadium (March 24-28).

Roberts, 70, took an astonishing 202 wickets in just 47 Tests. “If you put fear into a batsman, you have him at your mercy,” he told the distinguished audience, including Mr Chet Greene, minister of foreign Affairs, international trade and immigration.

In a confession that clearly pained him, he admitted: “For the first time ever I’m saying I think England have a chance of winning the Test series because of the standard of our cricket, but I’d love you to come and see the scenery of our island. The beaches around the country, the different inlets… and then go over to Barbuda, which is even more beautiful. It has the best beaches anywhere in the Caribbean… the sand is pink!”

Roberts said he had developed his physique for fast bowling from his early life on the island. “I enjoyed running, right from my early years. I spent most of the time running in the hills, in the water, which helped me develop strong legs. You need that for fast bowling, or strong shoulders, like Curtly has.”

When asked who the best batters he bowled to were, he quipped: “Any Yorkshire men here? Because I have sad news, it’s not Geoff Boycott! It was Sunil Gavaskar. Depending on the surface you’re playing on… if the ball bounced, Sunil surrendered early. If the ball bounced below or at knee height, that famous cover drive would come out, with him going down on his right knee, and we knew we were in trouble. He was the batsman I’d most like to dismiss early.”

He picked his best spell as his 3 for 41 in the second innings of West Indies’ 55-run victory over England at Headingley in 1976. “I took three wickets in the first three overs, which set England back. I should have had a fourth, but Peter Willey was given not out by David Constant. If he’d given him out the match would have finished that night. I didn’t get another wicket. But that spell of 3 for spit was the best I had, because of the context of the game.”

Richardson, 59, 16 Test centuries, nominated his toughest opponent as Pakistan’s Wasim Akram. “He didn’t just have pace… he was a great artist,” he told the guests. “It was a short run-up, but he was able to swing it both ways, seam it… and magically reverse it. I don’t know how he did it… there was controversy… but he was master of it. He was a cunning bowler. He had a great combination with Waqar Younis, who was also quick, but he had a low trajectory, with late in-swinging yorkers: very difficult to play.”

Ambrose, 58, reminded the crowd that they had his mother, Hillie, to thank for his 405 wickets in 98 Tests. “I was influenced by the NBA, growing up in Antigua,” he said. “The game looked so exciting. I was a tall chap. I figured slam dunking was more exciting than playing cricket. But my mother was a cricket addict – always wanted her son to be a cricketer.
“She kept pestering me: ‘Be a cricketer, be a cricketer!’ I decided to give it a try in 1984 for a club. I was quietly hoping it wouldn’t work, so at least she thought I’d tried. Fortunately in 1985 I was in the Antigua team, and in 1988 there were a few injuries, and I was in the West Indies team. I went from not wanting to play cricket to being in the West Indies team within four years. The rest is history! My mother was a gem for forcing it!”

He says the best batsmen he bowled at were Sachin Tendulkar and Ricky Ponting. “Ponting would take you on… Tendulkar never showed any emotion. Some guys you can look in their eyes and know that they are not comfortable…these guys were different.” While he acknowledges his spell of 7 for 1 against Australia at Perth in 1992/93 was difficult to beat, he also picked out his 8 for 45 against England at Barbados in 1989/90; and his 6 for 34 against South Africa at Barbados in the tourists’ return to Test cricket in 1991/92.

He promises England fans a memorable time on his home island, and says he will play his bass guitar with Richardson (guitar) in their Spirited Band music combo.

“There’s no island in the Caribbean like Antigua,” he says. “The music, the entertainment, the food and drink… it’s the place to be. It’s the best place to watch the cricket, and cricket and to relax from work and unwind and enjoy the fabulous cuisine.”