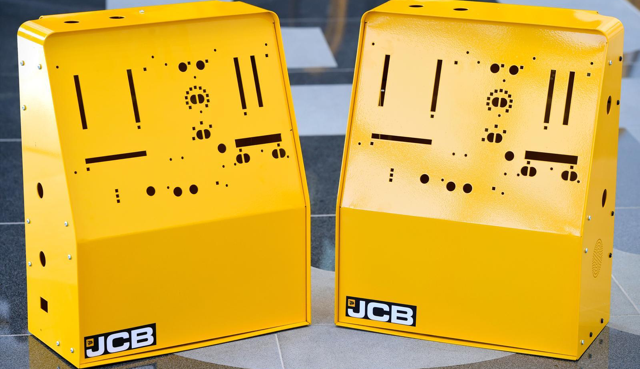 CWEIC Strategic Partner JCB is poised to re-start production at a factory closed as a result of the Coronavirus crisis in order to join the national effort to manufacture ventilators, the company announced today.

JCB received a direct appeal from UK Prime Minister Boris Johnson earlier this month to help plug the national ventilator shortage and to help save lives of Coronavirus patients. Following the approach, JCB Chairman Lord Bamford promised to help in any way the company could and immediately mobilised a research and engineering team to examine potential ways to assist.

Now JCB is ready to restart production at a factory which has been closed for nearly two weeks as a result of the Coronavirus crisis. But instead of making cabs for JCB diggers, the plant is being mobilised to make special steel housings for a brand new design of ventilator from Dyson. A minimum of 10,000 of the JCB housings are earmarked for manufacture once Dyson receives regulatory approval for its design.

The first prototypes of the housings have been delivered to Dyson after rolling off the production line at JCB’s £50 million Cab Systems factory in Uttoxeter, Staffordshire, which Boris Johnson visited during the election campaign. The factory fell silent on March 18th along with eight other JCB UK manufacturing plants after a fall in demand caused by the Coronavirus crisis. Mass production of the housings could start in a matter of days.

Today JCB Chairman Lord Bamford said: “When we were approached by the Prime Minister we were determined, as a British company, to help in any way we could. This project has gone from design to production in just a matter of days and I am delighted that we have been to deploy the skills of our talented engineering, design and fabrication teams so quickly at a time of national crisis. This is also a global crisis, of course, and we will naturally help with the production of more housings if these ventilators are eventually required by other countries.”

JCB’s response to the national call to action would see the return to work for around 50 employees affected by an extended company shutdown announced last week. JCB suspended production at its nine UK production plants until at least the end of April as a result of the Coronavirus crisis and furloughed the vast majority of its 6,500 workforce. The company is paying them 80% of their basic pay for the next month, regardless of what they earn. Employees returning to work to help manufacture the ventilator housings will be paid 100% of their normal pay.

HELP ON THE MENU AS JCB SUPPORTS THE VULNERABLE AND HOMELESS

JCB has launched an international aid initiative in the communities around its factories to help people in need of food as a result of disruption caused by the Coronavirus pandemic.

The company’s catering staff in the UK and India are preparing more than 37,000 meals a week for distribution around towns and villages located close to its plants. The initiative is the idea of Lady Bamford, wife of JCB Chairman Lord Bamford.

In the UK, staff are busily preparing 2,000 cottage pies a week for distribution in the North Staffordshire area. The first of the cottage pies arrived at The Hubb Foundation in Burslem, Stoke-on-Trent for distribution today (Thursday, April 2ndd), to children and families in need of support across the city. JCB also plans to expand the initiative to cater for the homeless.

The first meals arrived in specially prepared containers with a message, which reads: “Lovingly prepared by JCB’s chefs for our local community.”

The scale of the operation in India is even bigger, where the Coronavirus has caused huge disruption to people’s lives. Forty-five JCB staff have been mobilised to cook more than 35,000 meals a week in the company canteens for communities around JCB’s factory locations in Delhi, Pune and Jaipur.

Today Lady Bamford said: “The world is facing an international crisis and now, more than ever, it’s important for communities to pull together and help some of the most vulnerable people in our society. The JCB teams in the UK and India are doing an amazing job to prepare so many meals for distribution to people who are most in need right now.”

In the UK, distribution of the meals will be widened in the coming days and weeks to cover the homeless, NHS frontline employees, vulnerable families in Rocester, Cheadle and Uttoxeter, the elderly and those suffering from mental illness.

The Hubb Foundation offers free activities, spaces and food to children and their parents across Stoke-on-Trent during school holidays.

Carol Shanahan, founder of The Hubb Foundation, said: “Our activities are limited due to the national restrictions, but the team was determined to provide meals in these unprecedented times. We are indebted to JCB for their support. The food will be delivered to our base at Port Vale Football Club and then distributed through our network of staff, volunteers and local businesses who are collaborating with us to a make difference in the city.”

The Hubb Foundation is planning to send out 5,000 meals over the Easter holiday, with the support of JCB.

Meanwhile, India is currently in national lockdown until April 14th and tens of thousands of the country’s 45 million migrant workers have been heading back to their villages after losing their jobs as businesses in the cities were forced to shut temporarily.

Thousands of migrant workers are also choosing to remain in the places where they work but with no income, they have no means to buy food.

To help alleviate the harrowing situation, JCB is providing food parcels to the most vulnerable in the areas around its factories. The food being distributed includes a vegetable curry, rice, green vegetables and chapatis and provides a meal of 1,000 calories. A team of JCB volunteers is working with local authorities to ensure the aid reaches the most vulnerable in society.